Sicily Escorted Tours
An escorted tour is the best solution to visit the highlights of Sicily in only one week or maximum 8-9 days.
We plan our tours carefully, designing the routing as a mix of historical sites, landscape, food & wine, archaeology, without forgetting to give you free time for your relax or personal wishes and needs.
Request a Callback
*We are fully licensed tour operator
Follow on Social Networks

We have a large selection of Escorted Tours in Sicily with daily Departures.

CHECK
OR
Discover all Tours

For any supplement information or other necessity, feel free to contact us by Email or using the contact form on this page

Escorted Tours in Sicily
An Escorted Tour is a multiday tour that includes hotel accommodation, transportation, sightseeing and some meals.
Our escorted tour are all conducted by expert driver escort or tour escort (depending the number of people confirmed on the activity planned for the day) that could be different day by day and who has the competences to promote the most important highlights providing basic historical & cultural information.
In some cases the tour can include licensed local guide (as per tour details and conditions) that are the only professionals, with a Regional license, permitted to conduct visits and tours in all sites and museums within a city.

An Escorted Tour is ideal for people who want some freedom but still have the comfort of a Tour leader who will take care of group and will orchestrate all services.
Our tours are all small size (maximum 25 people) and perfectly designed for those who usually enjoy traveling in a private-form and not with other tourists: the small size guarantees you a friendly experience at the convenience of a fixed package price.
Usually our staff is at your disposal from the early morning to the afternoon for approximately 8 hours per day, while the evening is at leisure.
In this way you will have the opportunity to have some time on your own to relax, shopping or strolling around. If you wish more time for your own, feel free to explain your needs to our staff before booking the tour and we will be pleased to suggest you the right solution, such as adding one or more pre-nights or post-nights at your tour.

Properties chosen for the tour are all first class and, when possible, centrally located, with just two or three hotel check-ins during the tour, because we wish your stay is as comfortable as possible. Around the hotel area there are plenty of pizzerias, restaurants and bars where to have dinner.
We give great importance to the quality of your travel experience, which is why we have compiled a fantastic range of services specifically designed to ensure your tour fulfils all your dreams.
These tours generally include a very nice schedule of touring and sightseeing and you will enjoy the real Highlights of Sicily.

Can I join an escorted tour if I have walking limitation?
We do not limit participation of people with walking limitation, but even if our staff will do all his best to consider your needs, we have to advice you that not all the sites you will visit during the tour are accessible with a wheelchair, because of steps, hills, or uneven ground.
In such cases the path is really too difficult and we are unable to guarantee the sightseeing. 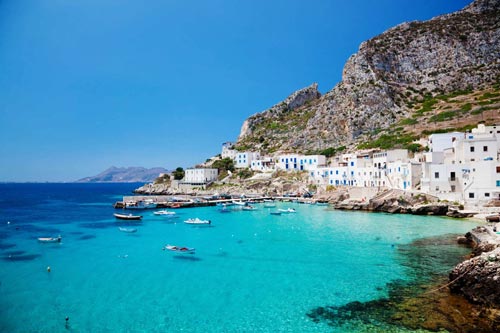 About Sicily
Sicily is the largest island in the Mediterranean Sea and it is part of Italy, but Sicily has its own distinct culture and history.
Located in the middle of the Mediterranean Sea in his thousand-year old history Sicily has always been considered of large interest for strategical and trading reasons.
Except short periods of independence, Sicily was controlled by great powers: Phoenicians, Greeks, Carthaginians, Romans, Vandals, Goths, Byzantines, Arabs, Normans, Spanish, Bourbons to mention only the main peoples who set themselves in the island.

Each people influenced Sicilian culture, architecture, language and habits and this is the reason that makes Sicily an unbelievably unique place! Nowadays walking in the island streets you can feel this multicultural mix and admire Byzantines buildings close to Baroque churches, followed by open air market in Arab style.

Even food has been influenced by different cultures and you have the chance to taste typical sweets and street food, such as cannoli with ricotta cream, marzipan candies, almond and pistachio pastries, panelle (a thin paste of crushed ceci/garbanzo beans rolled into sheets, fried and served in pizza-like slices) and sfincione (a special pizza topped with tomatoes, onions, a few anchovies and grated caciocavallo cheese, seasoned with a dash of oregano).

Sicily is also famous as olive oil and wine producer and there are a lot of farmhouses and wineries to visit that offer the possibility of a tasting or a lunch or light-lunch: mixed local product such as cheese, salumi, olives, local bread combined with tasting of olive oil and wine.
Even though Sicily is very famous for his crystalline sea, landscape is various. Often people imagine Sicily as a little island, but from west side to east side there are 300 km and more than 150 km from North coast to South coast.
The middle of Sicily is characterized by hills and mountains up to 1.800-1.900 meters, while in the east coast (close to Catania and Taormina) Mount Etna overlooks a wide area.
Etna is the highest and most active volcano in Europe (it is high around 3.300 meters but it is possible to ascent only up to 2.920 meters) and its natural park is rich in sounds, perfumes, and colors.

What are the most tourist cities of Sicily? 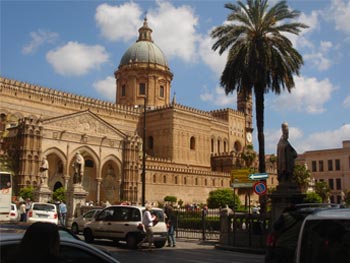 Palermo
the capital of Sicily, is the biggest city of the island and is located on the North-West coast. It is very ancient (it was founded in 734 BC by the Phoenician) and rich in history and culture, characterized by an unbelievable number of churches and palaces built along the centuries in different styles. Arabs, Byzantines, Normans and Spanish have influenced Palermo architecture more than other peoples who controlled the town and nowadays the capital is a wonderful mix of cultures and styles. During the tour you will do a walking tour of the city center, sightseeing the Cathedral and the main monuments and churches along Maqueda Street, such as Pretoria Fountain, Four Corners, Massimo Theatre and Politeama Theatre. Furthermore you will cross an open air market, heritage of the Arab culture in Sicily, full of stands of fresh fish, fruit, vegetables, spices and other and where you will have the opportunity to taste typical street food. If you are interested in visiting more monuments and churches, or museums, we suggest to book a pre/post night and spend an extra day in the town.
Mount Etna 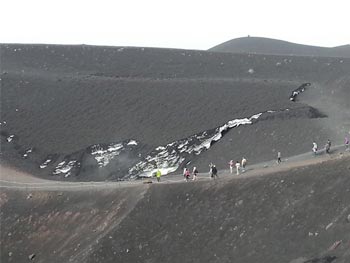 Mount Etna
is the highest and most active volcano in Europe (approx. 3.326 meters). Located on the east cost of Sicily, Etna is a natural park that will fascinate you for its landscapes: from the bottom of the mountain climbing up to the top you will run into vineyard, dense woods and spartan wasteland of historic lava flows and volcanic ash. Dotted with snow most of the year, some of the lava is dated at 300,000 years old. Etna Volcano is not included in the routing of the tour, but we suggest to spend a full day exploring slopes and lava flows with our staff. Most of the year it is possible ascent to the top of the mountain by cable car and Uni-Mog or in alternative you can reach only 1.900 meters and stop for a light-lunch in a winery/farmhouse to taste Sicilian wines and local products. Please contact our staff at time of booking in case of interest.
Agrigento 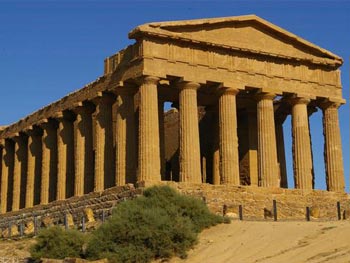 Agrigento
is an ancient town located on a plateau in the South side of Sicily and was founded by Rhodian-cretan colonists around 582 B.C. that named the city “Akragas”. But according to legend, the town was founded by Daedalus and his son Icarus after they had fled from Crete “by air”. During the tour you will visit the Archaeological Park of the Temple Valley, dated around Vth century B.C., that is part of Unesco World Heritage. The main temples included are Temple of Hera, the Temple of Concordia, the Temple of Hercules and the Temple of Zeus. The Temple of Concordia is the best preserved example of Doric art in Italy, and it is admired for its nobility and integrity.
Taormina 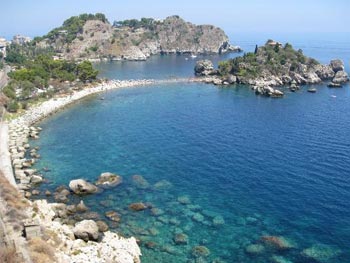 Taormina
is a romantic village renowned over the world that represents an unmissable stopover for all tourists coming in Sicily. It is located on a hilltop (in the east side of Sicily) overlooking the wonderful Isola Bella and Mount Etna, the biggest volcano of Europe. The center is very small, from one side (Catania Gate) to the other (Messina Gate) is only 700 meters, but you will love strolling around in this pedestrian area, discovering the picturesque streets (e. g. Vicolo Stretto, large less than one meter) or relaxing on the terraces with view. The main monuments are the Dome, Corvaja Palace and the famed Greek-Roman Theatre, dated third century BC, and after expanded by the Romans, from where you can admire an amazing panorama. Taormina has plenty of bars, restaurants and pizzerias, Taormina is also ideal for shopping.
Monreale 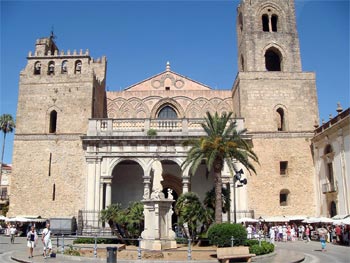 Monreale
is a little town located about three hundred meters above sea level, overlooking Palermo. During the tour you will visit the world renowned Arab-Norman Dome (built on the twelfth-century) with golden mosaics covering the cathedral walls that represent the scenes from the Old and New Testaments.
Segesta 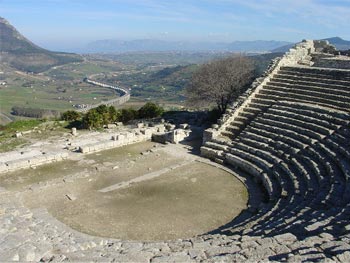 Segesta
is located in the western side of Sicily and was founded by the ancient indigenous Elymian people. The Archaeological Park of Segesta includes the Doric temple and the theatre. During the tour you will have time only to visit the unfinished and well preserved temple dated late 5th century BC from where you will enjoy an impressive view of the surrounding area.
Piazza Armerina 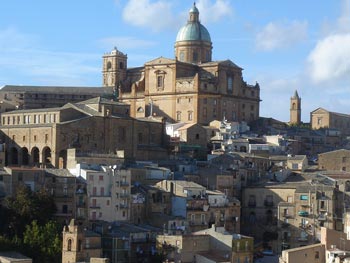 Piazza Armerina
is a little town renowned for the Roman Villa of Casale, one of the most beautiful villas of the Roman ever built (330-360 AD), with 60 rooms and 3500 square meters of floor mosaics. The mosaics discovered here are celebrated among scholars of antiquity. Depicting scenes from daily life, such as hunting, the mosaics are as remarkable for their sociological value as for their artistry. One of these, showing women clad in two-piece swimsuits exercising with barbells, could well describe a scene typical of the twentieth century.
Siracusa 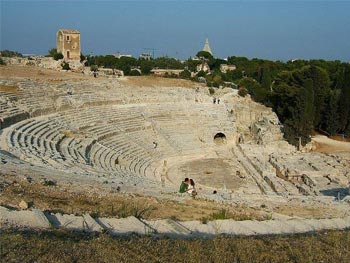 Siracusa
is an ancient town founded by Corinthians in 734 BC, and located in the southeastern coast of Sicily. During the tour you will visit the Neapolis Archaeological Park that belongs to the Unesco heritage and highlights the Greek Theatre, the Roman Amphitheatre and the Paradise Quarry. Then you will walk around in the Ortygia island, discovering the ancient and medieval streets, the Spring of Arethusa, the Cathedral and several sites of Greek, Byzantine and Judaic civilization.
Ragusa 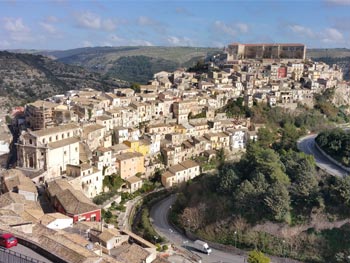 Ragusa Ibla and Modica
are two wonderful Baroque towns that belong to Unesco heritage “Val di Noto”, included in many of our escorted tours. The two towns are located in the Southeast side of Sicily. During the tour you will admire the Baroque architecture, visiting several stunning palaces and churches. In Modica you will taste the famous chocolate, still made the same way the ancient Aztecs made chocolate in Mexico and its tradition dates back to the 16th century, this technique was brought over by the Spaniards.
Erice 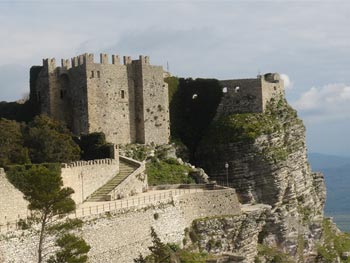 Erice
is a medieval town located around 750 metres above sea level that overlooks Trapani, San Vito lo Capo and Egadi islands. Founded by Elymian people, it was an important religious site associated with the goddess Venus. During the tour you will stroll around its typical ancient streets and you will have the opportunity to taste marzipan candies and other delicacies like almond and pistachio pastries.
Contact us Now
Compile the form and request a callback
OR
Call us
IT: +39 091 6269685
USA: +1 718 473 0803
UK: +44 208 133 6934
AT: +61 280 113 849
Made with